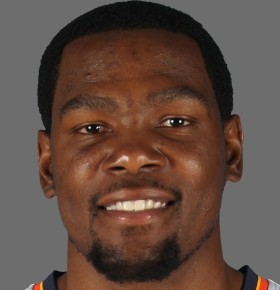 American professional basketball player Kevin Durant has developed into one of the NBA’s greatest players in recent years as a starting forward for the Oklahoma City Thunder, though he is now a member of the Golden State Warriors. After a number of MVP caliber seasons, Sports Speaker Kevin beat out LeBron James for the 2014 NBA MVP Award and has won the scoring title 4 times in his 7 seasons in the NBA. The NBA phenom has enjoyed a number of endorsement companies including his own signature shoe and product line with Nike and advertisement campaigns for Sprint, Gatorade, and General Electric.

Kevin was one of the top prospects entering the 2007 NBA Draft after being named the Naismith Player of the Year in his freshman season at the University of Texas. He end up being chosen #2 overall, and joined Carmelo Anthony and LeBron James as the only teenagers in the league to average over 20 points that year in his first season in the NBA. After winning the Rookie of the Year honors, the team picked up Russell Westbrook in the draft and started the foundation of what is now the best 1-2 punch on any team in the NBA. Kevin has also played a huge role on the U.S. Men’s National team which won Gold in 2010 at the FIBA World Championships and his first Olympic Gold Medal in 2012 at the London Olympic Games.

Kevin’s warm and loving personality off the court has helped make him the popular sports icon he is today and his philanthropic endeavors are widely recognized around the league. After the tragic hurricane ripped through Moore Country Oklahoma in 2013, Kevin pledged $1 million to the American Red Cross to help the victims and prompted the Oklahoma City Thunder organization and his main sponsor Nike to match his donation. That same year he would also sign with a new agent; none other than Jay-Z and his company RocNation. Jay-z also has assumed agency responsibilities for Seattle Mariners star Robinson Cano and New York Giants wide receiver Victor Cruz.