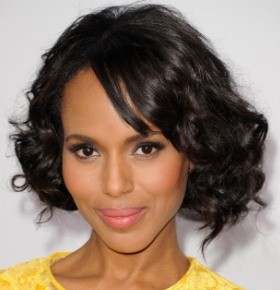 Since its pilot episode in 2012, the show has become one of the most talked about drama series in history. Washington joins costars Columbus Short, Darby Stanchfield, Guillermo Diaz, and Katie Lowes who make up the staff of Olivia Pope’s crisis management firm, Olivia Pope & Associates. She also stars alongside actor Tony Goldwyn who plays the President on the show, Fitzgerald Thomas Grant III, as well as his Chief of Staff, Cyrus Beene, played by Jeff Perry, and the first lady, Mellie Grant, played by Bellamy Young. Guest stars have included Friends star Lisa Kudro, Private Practice actor Paul Edelstein, and Father of the Bride star, George Newbern. In April 2014, Time magazine included Washington in its annual TIME 100 as one of the “Most Influential People in the World.”

For her portrayal of Olivia Pope, Celebrity Speaker Kerry Washington has been nominated for several prestigious awards including a Golden Globe for Best Performance by an Actress in a Television Series, a Primetime Emmy Award for Outstanding Lead Actress in a Drama Series, and a Screen Actors Guild Award for Outstanding Performance by a female Actor in a Drama Series. In 2013 she won the TV Guide Award for Favorite Actress and shared the Fan Favorite Award with her costars.

Prior to her role on Scandal, Washington starred in several popular films including Our Song, Save the Last Dance, Bad Company, Mr. & Mrs. Smith alongside actors Brad Pitt and Angelina Jolie, as well as the 2004 film, Ray, which also featured famous actors Jamie Foxx, Terrence Howard, and Regina King. Kerry has also guest starred in other television series including NYPD Blue, Law & Order, Boston Legal, and hosted Saturday Night Live in 2013. She has also appeared on Oprah’s Next Chapter, Good Morning America, The Daily Show, the Ellen DeGeneres Show, Chelsea Lately, and countless others.