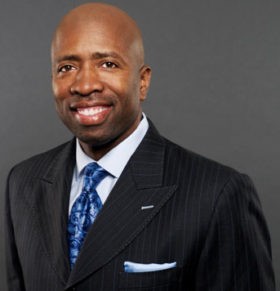 Sports Speaker Kenny “The Jet” Smith has built and continues to have a notable presence in the basketball world, first as a professional player, and now as an analyst. Kenny first broke onto the scene playing basketball at the University of North Carolina, where he held a starter position for four years as one of Dean Smith’s Tar Heels. In 1987, Kenny earned an NCAA Basketball All-American award and Player of the Year before entering the draft and getting picked up by the Sacramento Kings.

At the end of his first season playing for the Kings, Kenny was nominated to the 1988 NBA All-Rookie Team. After another season, Kenny was traded to the Atlanta Hawks and then to the Houston Rockets, where he led his team to two NBA Championship victories in 1994 and 1995. Kenny played another season for the Rockets before his now co-analyst joined the team. Kenny was traded to the Detroit Pistons, the Orlando Magic, and finally the Denver Nuggets before throwing in the towel and heading for the locker room.

Kenny retired from the game after a decorated career, only to join the ranks of Turner Network’s critically-acclaimed NBA talk-show, Inside the NBA. As an analyst, Kenny typically works alongside co-hosts, Ernie Johnson Jr., Charles Barkley, and Shaquille O’Neal. Inside the NBA has won a Sports Emmy Award for Outstanding Studio Show. Kenny has appeared as an analyst on NBA TV and has worked for MSG Network, broadcasting New York Knicks games. He also has a reality show about his family on TBS titled Meet the Smiths that premiered in April 2015.

As a role model for up-and-coming basketball players, Kenny always tries to have a meaningful impact on his community, both on and off the court. Kenny was elected to the board of Big Brothers and Sisters of Houston in 1991 and hosted the NBA Players Hurricane Relief Game in 2005 to support the victims of Hurricane Katrina.