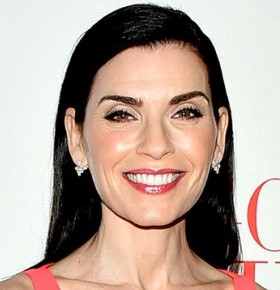 Actress Julianna Margulies is a celebrity speaker, producer, and television star who currently plays the lead role in the hit political and legal drama series, The Good Wife. Now in its fifth season, the CBS series continues to be a success and so does its leading lady; for her portrayal of character Alicia Florrick, Margulies has won several prestigious awards including a Golden Globe award for Best Performance by an Actress in a Television Series Drama in 2009, a Primetime Emmy Award in 2011 for Outstanding Lead Actress in a Drama Series, as well as two Screen Actors Guild Awards for Outstanding Performance by a Female Actor in a Drama Series in 2010 and 2011.

Prior to her role on The Good Wife, celebrity speaker Julianna Margulies was cast as Nurse Carol Hathaway in the extremely popular medical drama TV series, ER. She acted in the series for six years alongside fellow actors George Clooney, Noah Wyle, and John Stamos. She also appeared in recurring roles on other well-known television shows including Scrubs, Canterbury’s Law, and The Sopranos where she joined famous actors Lorraine Bracco, Edie Falco, and James Gandolfini for four episodes. In addition to her work on television, Margulies was cast in several films including Out for Justice, Ghost Ship, and Snakes on a Plane with costar Samuel L. Jackson.

Throughout her career, Julianna has appeared as a guest on countless talk shows including The Rachael Ray show, the Late Show with David Letterman, The Ellen DeGeneres Show, Entertainment Tonight, and The Tonight Show Starring Jimmy Fallon. She has also been featured in and on the covers of Entertainment Weekly, MORE magazine, BAZAAR, Marie Claire, Vanity Fair, Allure, Good Housekeeping, In Style, The Hollywood Reporter and many more.