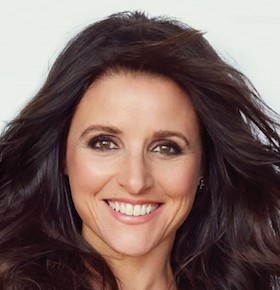 Television star and celebrity speaker Julia Louis-Dreyfus is one of the most nominated actresses in the history of the Emmy Awards, and a member of the Television Academy Hall of Fame, with good reason.  The New York born comedian got her start training and performing with the renowned improvisation theatre group The Second City based in Chicago. She quickly mastered the art of improvisation becoming one of the best performers at Second City, leading her to be invited to join the cast of Saturday Night Live in 1982. Julia was only 21 years old at the time, making her the youngest female cast member in the history of the show. She stayed with the late night comedy sketch show from 1982-1985, getting the privilege of performing with some of the best comedians to ever take the stage in Rockefeller Center, such as Eddie Murphy, Jim Belushi, Billy Crystal and Martin Short. After her departure from the show, she went on to appear in various films such as Woody Allen’s Hannah and Her Sisters, Soul Man, and National Lampoon’s Christmas Vacation, which starred fellow SNL alum Chevy Chase. She also landed a role in the short-lived NBC sitcom Day by Day, but her biggest role was still yet to come.  In 1990 she was cast in the NBC’s Seinfeld as Elaine Benes, a role that would make her a household name.  The show ran for nine seasons, and throughout the nine seasons, Julia earned a Golden Globe Award, five Screen Actors Guild Awards, five American Comedy Awards and an Emmy.  The series finale of the show was one of the most watched television events in history. During the Seinfeld years, she also appeared in blockbusters such as Fathers’ Day with Robin Williams and Billy Crystal, as well as Woody Allen’s Oscar-nominated film Deconstructing Harry. Once Seinfeld had come to a close, celebrity speaker Julia Louis-Dreyfus took a quick break from television before returning in 2002 in the sitcom Watching Ellie, created by husband Brad Hall, opposite Steve Carell.  The show only lasted two seasons, however, and rumors of the “Seinfeld Curse” began flying, stating that the cast of Seinfeld would never be able to achieve success again. Julia disproved this curse by landing a recurring role on Emmy winning comedy Arrested Development from 2004 to 2005, then landing the lead role in the CBS sitcom The New Adventures of Old Christine, which ran from 2005 to 2010 and won her an Emmy. Then in 2011 she landed the lead role in HBO comedy series Veep, which she also produces. The show went on to be praised by the critics, winning her yet another Emmy marking her 14th acting nomination, which surpassed the previous record held by Lucille Ball of I Love Lucy.

In addition to acting, this celebrity speaker is active in politics appearing in a video urging President Obama to reject the proposal of Keystone XL pipeline. She has also been an environmental activist raising millions of dollars for organizations such as Heal the Bay, the Natural Resources Defense Council and the Trust for Public Land.