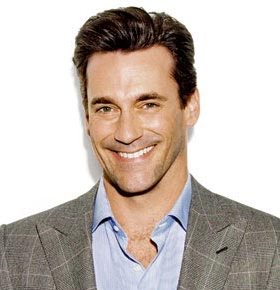 American actor Jon Hamm is best known for his role as creative director Don Draper on the popular television show Mad Men. After struggling his first few years as an actor living in Los Angeles, Celebrity Speaker Jon’s dedication paid off when he beat out eighty other candidates for the part of Don Draper, and he is now one of the recognizable faces in Hollywood today. He received a Golden Globe for Best Actor in a Drama Series in 2008 for his outstanding performance on the critically acclaimed show, as well as ten Emmy nominations. Mad Men also stars Elisabeth Moss, Vincent Kartheiser, January Jones, Christina Hendricks, and John Slattery as lead characters. Additionally, Jon has experience behind the camera as well as in front of it—he previously directed two episodes of the show.

Jon’s experience is not limited to just television; the actor has lent his talents to films such as Bridesmaids, alongside Kristen Wiig, Maya Rudolph, Melissa McCarthy, Rose Byrne, and Ellie Kemper; he played an FBI agent with Ben Affleck in The Town, a crime drama released in 2010, as well as the fantasy action film Sucker Punch, which starred Emily Browning, Abbie Cornish, Vanessa Hudgens, and Jena Malone. Named People magazine’s Sexist Man Alive and Entertainment Weekly’s Entertainer of the Year in 2008, Jon’s personality and looks place him in high demand as a host; he hosted both the 21st ESPY Awards in 2013 and an episode of Saturday Night Live in 2008.

Jon has appeared in numerous Gap advertisements alongside his actress wife Jennifer Westfeldt has lent his voice to several commercials and campaigns, such as an advertisement for the unveiling of the Mercedes-Benz’s S400 Hybrid and an American Airlines commercial called “Change is in the Air.” The actor also enjoys playing golf and tennis, and is a proponent of animal rescue; he and his wife adopted a dog from a shelter in California.