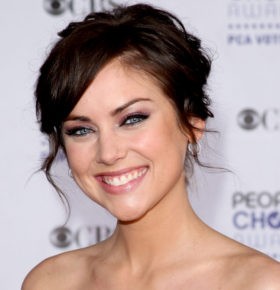 Growing up in Charlotte, North Carolina, actress Jessica Stroup set off to explore a career in acting upon graduating high school in 2004. Her first acting gigs came in a guest appearance on the teen Nickelodeon shows Unfabulous and Zoey 101. She then went on to appear in several other popular television series such as Greys Anatomy, October Road, and True Blood. In addition to her beginning television work, she appeared in several small independent films such as Left in Darkness, Pray for Morning, and Vampire Bats. She then climbed the ladder, moving from small independent films to big screen films, landing a role in The Hills Have Eyes 2 in 2007. Despite the less than spectacular reviews of the movie, her career took off after this role, as she went on to be cast in the major motion picture This Christmas, and then as a season regular on 90210, a reboot of the hit series Beverly Hills, 90210, which ran for five seasons.  Her next project came in April 2008, playing the role of Claire in the horror film remake, Prom Night, alongside Brittany Snow. She continued her success landing roles in the movies Homecoming and The Informers, then in 2011 she opened a whole new realm of opportunities in her career, as she guest starred in Family Guy and met Seth McFarlane. McFarlane went on to create the hit movie Ted a year later, and brought on Stroup to play Tracy, best friend of Mila Kunis’ character, in the film. After Ted, came celebrity speaker, Jessica Stroup’s, next big project, The Following.  The Fox network announced in August 2013 that Stroup would join the cast of The Following, as a series regular, starting in season two.  On the show she plays the character of Max, the niece of Ryan Hardy, Kevin Bacon. Her portrayal of the scrappy NYPD cop received positive reviews from both critics, and fans, and she is sure to stun again in season three of the show, set to premiere in January 2015.