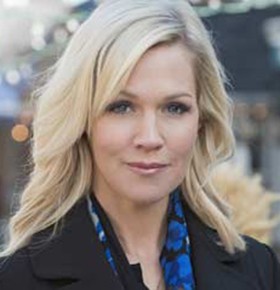 Actress and Celebrity Speaker Jennie Garth first noticed her uncanny talent at dancing and modeling when her family moved to Arizona and she began taking classes. After only being discovered by famous talent scout Randy James did Jennie know for sure she would become an actress no matter the cost. Since then nothing but hard work has gotten her to where she is today.

Growing up in Illinois on a horse ranch with her 6 brothers and sisters is how Jennie Garth’s life began. The move from there all the way to Arizona would be tough on anyone and Jennie was able to immerse herself in something new she loved; dance and modeling. Celebrity speaker Jennie Garth is most known for her roles on television sitcoms Growing Pains, and Beverly Hills, 90210. In 2002 she co-starred in sitcom, What I like about You with Amanda Bynes where she stayed on the show for all four seasons. Growing Pains featured actors Alan Thicke, Joanne Kerns, and even Leonardo DiCaprio.  She was also recently on the ABC hit dance competition series Dancing with the Stars where she and partner Derek Hough, American dancer and choreographer, danced their way to the semi-finals. Jennie has had her own Country Music Television reality show in 2012 entitled Jennie Garth: A Little Bit of Country. She is set to star in another reality show about her life raising her three daughters that is assumed to be released sometime in 2014.

Celebrity Speaker Jennie is s spokesperson for Hidden Valley which produces salad dressings. Eating healthy is important to her and loves to advocate the fact that everyone should pay attention to their health regularly. With this in mind Jennie has shown support for charities that include the Red Cross, American Heat Association, and Feeding America. She also works hand in hand with Toys for Tots, the United Way.