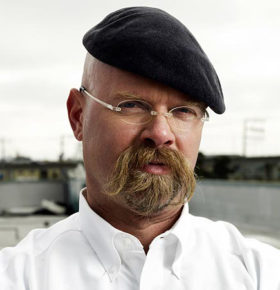 Celebrity speaker Jamie Hyneman is the co-host of the popular television series MythBusters on the Discovery Channel. He is also a special effects expert and owner of M5 Industries, the special effects workshop where MythBusters is filmed. He is known for his calm and logical demeanor on the show, as opposed to co-host Adam Savage’s more animated persona.

After earning a degree in Russian linguistics from Indiana University, Celebrity Speaker Jamie Hyneman ran a sailing/diving charter business in the Caribbean for several years. After this time, he moved into the visual-effects industry, and after working for a number of special effects companies, he was hired by Colossal Pictures’ model shop. With this major role, Hyneman managed the production of models and special effects for hundreds of commercials and movies. After 18 years of hard work, Jamie created M5 Industries Inc. and took over the shop in which he had been working. Throughout his special effects career, Hyneman has worked on Top Gun and the films Naked Lunch, Flubber, and the second and third installments of the Matrix Trilogy. In 2003, Jamie Hyneman was cast as an actor in the show MythBusters, a science entertainment television program. The show rocketed to extreme popularity, honing a viewership of approximately 2,305,000 in 2009.

In addition to being on MythBusters, Hyneman notably created a can-spitting vending machine seen in 7 Up commercials, as well as a two-wheeled football shoe, which is seen in Nike Lab commercials. In 2010, Hyneman delivered a commencement speech at Villanova University, and afterwards he was awarded an honorary Doctorate of Engineering. Hyneman has also spoken at MIT, the University of Florida, and Michigan Tech, among other schools. He has appeared on a number of entertainment programs with Adam Savage, including Good Morning America and the Late Show with David Letterman. In addition, they have been featured in prominent print outlets, such as Popular Mechanics and Skeptic magazine.  In 2010, President Barack Obama appeared on an episode of MythBusters that covered the Archimedes Solar Ray myth. In 2011, a live stage show called Mythbusters Behind the Myths Tour was created, where experiments are conducted on-stage and background details of the show are discussed. The following year, a traveling museum exhibit named Mythbusters: The Explosive Exhibition premiered at the Museum of Science and Industry in Chicago to much anticipation; it was developed over the span of five years.