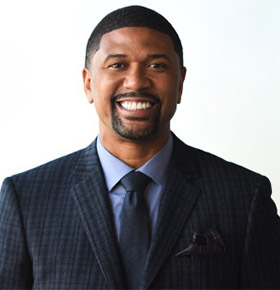 Former NBA Player, ESPN Analyst, and current sports speaker Jalen Rose played for 6 teams during his 13-year career. Rose is most well known for his time at Michigan as part of the infamous “Fab Five”. Sports speaker for hire Jalen Rose currently appears on ESPN’s NBA Countdown, Get Up, and the Jalen and Jacoby podcast on ESPN Radio.

A star recruit coming out of high school, Rose was recruited as part of the Michigans Fab Five class of 1991. Alongside high profile players like fellow Detroit native Chris Webber and Juwan Howard. The Rose led team would revolutionize college basketball, playing in baggy shorts and black socks, making it to two national championship games. Celebrity speaker Jalen Rose set freshman scoring records, as his team was on top of the sports world, changing the way media covered basketball. The Fab Five’s run was captured in the ESPN 30 for 30 and ESPN Films documentary, Fab Five, which Rose helped produce. After the 2007 season, celebrity speaker for hire Jalen Rose retired from the Phoenix Suns and began his transition to broadcasting. Sports speaker Jalen Rose currently co-hosts Get Up!, a morning sports talk show on ESPN and is available for speaking engagements, product endorsements, autograph signings, and public relations campaigns.

Rose began working for ABC and ESPN after his retirement hosting NBA Countdown and his current show Get Up!, with Michele Beadle and Mike Greenberg. In 2015, Rose released his first book Got to Give the People What They Want, chronicling his life story, reaching a NY Times Bestselling position.

In 2000, celebrity speaker Jalen Rose established the Jalen Rose Foundation/Charitable Fund. Their mission is to help underserved youth through grants and life-changing opportunities. To further this goal, he created the Jalen Rose Leadership Academy. It is a tuition-free high school in Detroit providing leadership experience to students. Rose serves as President on the Board of Directors and was recognized by The Detroit News as the Michiganian of the Year Award for his efforts in the community. In addition, he was awarded the 11th Annual National Civil Rights Museum Sports Legacy Award, and the 2016 Mannie Jackson – Basketball’s Human Spirit Award by the Naismith Memorial Basketball Hall of Fame.

On top of his life-changing efforts in his hometown community, Rose is the owner of Three Tier Entertainment, a Los Angeles based production company, representing talent and developing television and film projects.

BOOKS: Got to Give the People What They Want

WORK WITH JALEN ROSE: Would your organization like to hire Jalen Rose for an endorsement, public relations campaign, or one of a kind appearance at your next conference or special event? Contact Celebrity Speakers Bureau today to hire Jalen Rose or another celebrity sports speaker via email at booking@celebrityspeakersbureau.com .