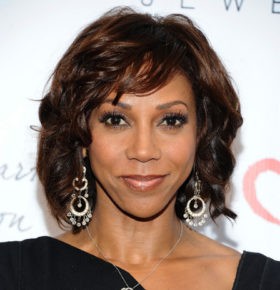 Conference Speaker Holly Robinson Peete is a famous actress, bestselling author, talk show host and philanthropist best known for her roles in the TV dramas 21 Jump Street and Hangin’ with Mr. Cooper. At just 4 years old, Holly starred with her father on the premiere episode of the hit children’s show, Sesame Street. Holly went on to play roles in numerous movies and television shows. It was recently announced that she will be seen alongside her family in their own reality series For Peete’s Sake on the OWN Network coming in 2016. The show will follow Holly and her NFL-star husband Rodney Peete as they balance their public careers and a fun-loving family of 6.

In 1997, Holly and Rodney founded the HollyRod Foundation, a non-profit that provides aid to families with autistic children and supports individuals living with Parkinson’s disease. The foundation hits close to home due to the fact Holly’s father suffered from Parkinson’s and her eldest son was diagnosed with autistic at 3-years-old. Her philanthropic efforts have won her numerous awards and honors including Los Angeles Magazine’s Most Inspirational Women Award, UCS Woman of Distinction Award, and The Southern California Broadcasters’ Association Community Service Award, just to name a few.

In 2010, Holly was a celebrity contestant on Donald Trump’s TV competition series Celebrity Apprentice where she made it all the way to the season finale. Holly became one of the original co-hosts of the popular CBS talk show The Talk when it first aired in October of 2010. The following year she appeared as a spokesperson in TV ad spots for Nestle Carnation Breakfast Essentials.

Conference Speaker Holly Robinson Peete has also had success as a published author. She won the 2006 Quill Literacy Award for her first book, Get Your Own Damn Beer, I’m Watching the Game: A Women’s Guide to Loving Pro Football. Her second book, My Brother Charlie, a children’s book written from the perspective of the sibling of an autistic child won a 2011 NAACP Image Award for Outstanding Literary Work.