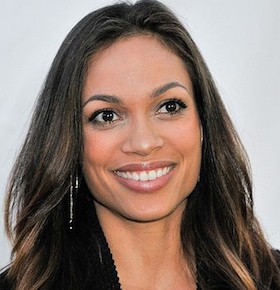 Rosario Dawson is an amazing actress and celebrity speaker who’s reputation of elegance and grace in the entertainment industry extends to her personal appearances. From child star on Sesame Street to world-renowned actress starring alongside Chris Rock in his latest film Top Five, celebrity speaker Rosario knows a thing or two about hard work and dedication. Outside of acting in film and TV, Rosario helped produce successful web series including one titled Gemini Division about an NYC detective.

Her first major movie role came as a 15-year-old in the controversial film Kids, before portraying roles in the films He Got Game and Men in Black II. In 2005, Rosario earned a Satellite Award for her performance as Mimi Marquez in the film adaptation of the Broadway classic, Rent. After her masterful performance in the film, Rosario was met with a number of successful roles in films such as Eagle Eye, Seven Pounds starring alongside Will Smith, and Sin City.

Rosario has also dabbled in stage performing. She has co-starred as Julia in Two Gentlemen of Verona, as well as appeared in The Vagina Monologues, Sin City and Rent. This celebrity speaker’s newest endeavor is producing. Rosario has helped produced several films over the past few years her most popular being, Descent. In 2009, she was given the honor of hosting her own episode of Saturday Night Live.

When she is not acting, Rosario has been utilized as a celebrity spokesperson for philanthropic programs including TripAdvisor.com’s More Than Footprints program in 2008 and the ONE Campaign. Rosario also lends her support to a number of efforts to protect our environment working with the National Geographic Society and The Nature Conservancy. In 2012, she partnered with SodaStream International to launch the first annual Unbottle the World Day dedicated to raising awareness about the rising issues with discarded cans and plastic bottles in our environment. Rosario’s excellent work with philanthropy events resulted in her receiving the Taormina Humanitarian Award at the 2015 Taormina Film Festival in Italy on June 13, 2015.