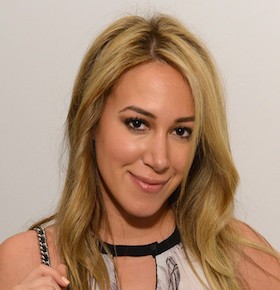 Entrepreneur, mother, actress, singer and TV host are just some of the titles that Celebrity Speaker Haylie Duff has held over her illustrious career in entertainment. But what makes Haylie different from most celebrities today is the emphasis she puts on family. Whether it be working with her sister Hilary writing songs or creating recipes that her daughter Ryan would love for her cooking show, Haylie always puts family first.

While she has spent most of her life on a set or in a recording studio, Celebrity Speaker Haylie Duff feels most at home in the kitchen. She started cooking only for friends and family and got amazing feedback from them; everyone loved her recipes! She decided to share them and began her blog The Real Girl’s Kitchen in 2012 to show what cooking should really be about: homemade food being shared with friends and family. Haylie began to notice that women really loved her refreshing take on cooking. After receiving her great grandmother’s cookbook from her father, she realized that she wanted her recipes to be about family and writing a cookbook would ensure that they could be passed down generation to generation, just like her great grandmother’s was. In 2013, the “Real Girl’s Kitchen” cookbook was made and flew off the shelves. With her past in the entertainment business and her cooking savvy, it was no surprise when the Cooking Channel gave Haylie her own cooking show in 2014.

Before she started cooking, Celebrity Speaker Haylie Duff began her career with her sister Hilary on the Disney Channel series Lizzie McGuire but soon came into her own and landed a role in the hit movie Napoleon Dynamite, which earned her a Teen Choice Award. After her win, she was cast in numerous roles in television series like 7th Heaven and in 2006, Haylie took her talent to Broadway where she starred as Amber Von Tussle in Hairspray.

Celebrity Speaker Haylie Duff is a talented individual who likes to share her creativity with others through the many different facets of her life and career.