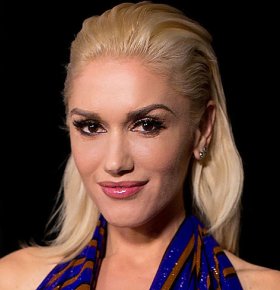 Celebrity Keynote Speaker Gwen Stefani is not afraid to be herself. As a singer, songwriter, fashion designer and celebrity mom, this entertainer wears many hats. But boy does she wear them well! When she is not furthering her own personal brand, Gwen is a featured judge on NBC’s overwhelmingly popular singing competition series The Voice with the likes of Pharrell, Blake Shelton and Adam Levine. In recent years she has focused heavily on expanding her fashion line, L.A.M.B., which was created in 2004. The line has grown from a few pieces each season to now featuring a new less expensive line called Harajuku Lovers. The Harajuku Lovers collection includes Gwen’s own signature fragrance line consisting of 5 different scents. In 2015, Gwen partnered with Urban Decay cosmetics to promote a new initiative to empower women called The Ultraviolet Edge.

Gwen rocked the stage as the lead vocalist and founder of rock band No Doubt which came to prominence in the early 90’s. Their song Don’t Speak climbed to the top of the Billboard Hot 100 chart in 1997 and the rest is history. 3 years later Rolling Stone Magazine named her The Queen of Confessional Pop. In 2002, Gwen won a Grammy Award for her collaboration with Eve on the song Let Me Blow Ya Mind. Some of her other more popular songs with No Doubt include Hey Baby and Underneath It All.

Celebrity Keynote Speaker Gwen Stefani was a woman of many talents and she wanted to try her hand at acting.

Her debut role came in Martin Scorsese’s The Aviator. The cast was nominated for a Screen Actors Guild Award. After the release of her second solo album, she reunited with the gang of No Doubt. The band toured across the world playing their classic hits and recorded a new album released in 2012.