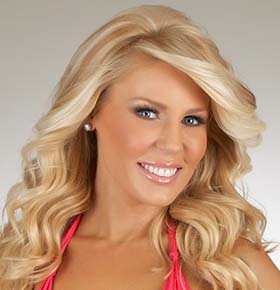 Celebrity Speaker Gretchen Rossi starred on the reality television series The Real Housewives of Orange County for four seasons, and has since carved out her own distinct brand and fashion collection. The series, which first appeared in 2006 and has aired for ten seasons, has had a rotating cast that currently consists of Heather Dubrow, Lizzie Rovsek, Shannon Beador, Tamra Barney, and Vicki Gunvalson; the latter two were co-stars of Gretchen. After leaving following the completion of the eighth season, Gretchen established her line of cosmetics, swimwear, and handbags called Gretchen Christine. The brand was inspired by her own trademark fashion sense seen on the Bravo show after fans constantly asked where they could get her styles at affordable prices; in fact, one of  Gretchen’s bikinis quickly sold out after she wore the swimsuit on an episode of the original Housewives franchise. In 2013, the California native partnered with Rolls Royce to collaborate on a design for a Rolls-Royce Ghost Gretchen Christine Edition. Since her exit from The Real Housewives of Orange County, Gretchen and fiancé Slade Smiley will appear as one of four couples on the WETV’s Bridezilla spinoff Marriage Bootcamp. A songstress as well, Gretchen recorded and released a single called Unbreakable in 2012, a very fitting song title for the reality star; her first fiancé passed away from a rare form of leukemia and her current fiancé’s son’s bout with a brain tumor.

In November 2013, OK! Magazine announced that Gretchen would be their new lifestyle contributor, giving beauty and style advice once a week in the popular magazine. Gretchen’s charity work includes supporting Family Equality Council with fellow housewives Tamra Barney, Kyle Richards, Brandi Glanville, and Camille Grammar; the organization provides assistance to the LGBT community and their families. She has also walked the runway in the Go Red for Women Fashion Show, a celebrity studded event that benefits The American Heart Association; other Bravo stars to strut their stuff in the show include Atlanta housewives Nene Leakes and Cynthia Bailey.