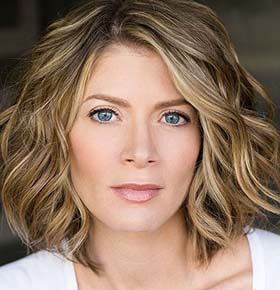 American comedian and actress Gillian Vigman got her start in sketch comedy on the TV series MADtv, which aired from 1995-2009 and followed the format of popular skit comedy show Saturday Night Live. Others may recognize her as the longstanding TV commercial wife of Jack from the restaurant Jack in the Box. Her career as a comedic actress ranges from many TV shows and commercial appearances to major big screen films including The Hangover and The 40-Year-Old Virgin.

Celebrity Speaker Gillian starred in her first skit with MADtv at the end of 2002 and is one of only 2 cast members on the show that appeared in an episode before they were officially added to the show’s cast as a regular. She followed her work at MADtv with a leading role in the ABC American sitcom Sons and Daughters which featured a script that was mostly improvisation with hardly any pre-written dialogue. Gillian’s TV career has also included providing hilarious comments on VH1’s I Love the 90’s series, and small roles on Scrubs, Parks and Recreation, and Cougar Town. Her movie appearances also include the box office hit Step Brothers, Deck the Halls, and The Hangover Part II.

From 2011-2013, Gillian starred on the set of another American sitcom titled Suburgatory, which follows main character George Altman and daughter Tessa as they become accustomed to their new life in the suburbs of New York. Gillian wowed America with her hidden cooking skills and was a contestant on the 2014 TV series Chopped: Tournament of Stars. She beat out fellow comedians to earn 1 of 4 spots in the finale episode with a chance to win money for the charity of her choice, the GO Campaign. Aside from her well-recognized work with Jack in the Box, Gillian has been utilized in a number of TV advertisements for brands such as Hanes clothing brand, 1-800 Contacts, Swiffer cleaning supplies and Esurance.