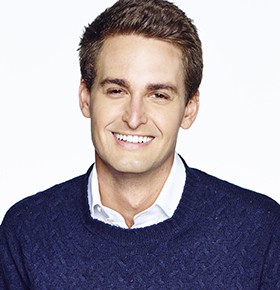 Millennial entrepreneur and social media speaker for hire Evan Spiegel is one of the most innovative minds in the technology/social media industry today after co-founding the popular mobile social media app Snapchat in 2011. The app has now grown to host over 100 million active users sharing daily pictures and video with their followers. In September of 2016, Evan and the Snapchat corporate team renamed their company Snap, Inc. to reflect the diversified progression of the company into other ventures. In addition, the company recently introduced its first hardware product for sale, a pair of sunglasses with a built-in camera allowing wearers to record up to 30 seconds of video at a time.

Evan attended Stanford University and it was during his studies in product design that he first introduced the idea of Snapchat to his peers as a class project. He worked with fellow classmate and friend Robert Murphy to develop Snapchat into a functioning mobile app and briefly left the university in 2012 to focus solely on development before returning to finish his degree.

In 2013, Evan turned down an offer from Facebook for $3 billion to buy the company. In May of 2016, the company was valued at over $18 billion. Snapchat is considered one of the most progressive, forward-thinking mobile apps in the social media space. Evan and his team continued to grow and advance the capabilities and functionality of their app including a lucrative deal with industry-leading media outlets with the creation of the Discover tab in the app that allows media outlets to add their own stories and pictures to the Snapchat online stream which is visible to everyone who uses the app.

Would your organization like to hire Evan Spiegel to make a personal appearance at your next event? Contact Celebrity Speakers Bureau today to hire Evan Spiegel or another top social media speaker to entertain and engage your audience at an upcoming corporate conference, speaker series, trade show or special event.