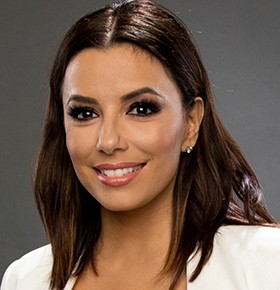 American TV/film actress and Celebrity Speaker Eva Longoria is best known for her role as Isabella Brana on the CBS soap opera The Young and the Restless from 2001-2003, and as leading role Gabrielle Solis in ABC’s American comedy drama series Desperate Housewives from 2004-2012. She has received 2 Screen Actors Guild Awards, a Teen Choice Award and a People’s Choice Award for her performances in Desperate Housewives.  Eva has built her reputation as a humanitarian and philanthropist through her efforts with charities including her own called Eva’s Heroes and as a voice of empowerment for the Latino community. In 2009, The Hollywood Reporter named Eva the Philanthropist of the Year for her consistent devotion to helping better her community. In May 2014, she initiated the Latino Victory Project to raise funds for candidates.

Before catching her big break with her role on The Young and the Restless in 2001, celebrity speaker Eva landed small roles on Beverly Hills, 90210 and on the hit long-running soap opera General Hospital. After starring in several straight to DVD films, she co-starred in The Sentinel alongside Kiefer Southerland and Michael Douglas. She is set to star in an upcoming film called Frontera also starring Ed Harris, Michael Pena, and Amy Madigan. Eva has recently lent her voice to a new animated series on Hulu called Mother Up! which follows the story of a former Hollywood star brought back down to Earth by the joys and pains of parenthood. She will also lend her voice to narrate an up and coming documentary about the importance of the Latino vote in America.

Throughout her career, Celebrity Speaker Eva seems to have had her hand in a little bit of everything. Her good looks have landed in top spots on Maxim magazine’s Hottest Female Stars and Hot 100 lists. She has appeared in a number of major print publications including Vogue, Marie Claire, GQ, Cosmopolitan and Glamour magazines. She has also been a spokesperson and brand ambassador for a number of brands including Bebe Sport, L’Oreal, and Pepsico Lay’s Do Us A Flavor campaign. In 2008, she teamed up with celebrity chef Todd English to open a 2 restaurant and nightclub locations in Hollywood and Las Vegas called Beso. Her career in the culinary didn’t stop there as she would release her own cookbook titled Eva’s Kitchen: Cooking With Love for Family and Friends. A comfortable and powerful speaker, Eva has spoken at the 2012 Democratic National Convention.