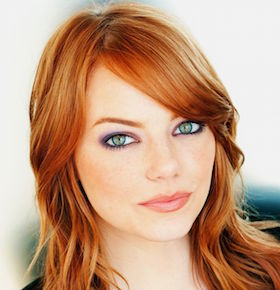 Celebrity Speaker Emma Stone is a popular American actress and model.  She jumped on the screen in 2007 making her first film debut in the comedy Superbad alongside co-stars Michael Cera and Jonah Hill.  The following year she went on to play roles in The Rocker and The House Bunny. 2009 marked Emma’s breakout year in acting as she was casted in several films including Ghosts of Girlfriends Past, Zombieland, and Paper Man with several prominent names in Hollywood including Matthew McConaughey, Woody Harrelson, Jeff Daniels, and Ryan Reynolds.

Emma’s first leading role, however, came in 2010 in the comedy Easy A and for that role she was nominated for the 2011 Golden Globe Award for Best Actress in a Musical or Comedy. After Easy A, Emma went on to star in several other box office hits including Friends with Benefits, Crazy, Stupid, Love, and The Help, which received an Academy Award nomination for Best Picture in 2012. The Help was an incredibly moving film about racism and earned countless awards following it’s release. That same year she would be awarded the Trailblazer Award at the MTV Movie Awards and The People’s Choice Award for Favorite Movie Actress. Most recently, Emma has been recognized for her work in the superhero films the Amazing Spider-Man, and The Amazing Spider-Man 2.  In addition to acting, Emma is also one of the faces for Revlon and does modeling alongside other actresses like Olivia Wilde and Halle Berry. Emma has also enjoyed numerous TV appearances which have included TV series such as 30 Rock,  iCarly, Malcolm in the Middle and hosting the popular sketch comedy show Saturday Night Live twice.

In 2013, she signed on to co-star in the comedy Birdman opposite Michael Keaton, which will be released October 2014. She has also been cast in the Woody Allen comedy Magic in the Moonlight, which hit theaters July 2014. The multi talented Emma also made her Broadway debut on November 11, 2014 as Sally Bowles in the musical Cabaret, which she performed until February 15, 2015.