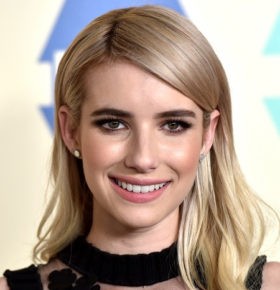 Celebrity speaker for hire Emma Roberts has come a long way from Teen Vogues’ best dressed and her Nickelodeon days, as she wore a pink sheer ruffled gown at the Met Gala: Camp Edition, rivaling her fashionista character Chanel on Screen Queens. In 2019, Roberts has starred in the film Paradise Hills, was announced to star in two upcoming films, Holiday and The Hunt, and will return for her 5th stint on the hit horror show American Horror Story: 1984. Roberts is also a brand ambassador for Neutrogena and was featured as the June 2019 Cosmopolitan cover girl.

Celebrity speaker for hire Emma Roberts has grown up in front of the camera. The niece of renowned actress Julia Roberts certainly knew she had some big shoes to fill when she decided to pursue a career in acting, but her growing talent and career is a clear indication of what’s in store for the future. Her most recent role has come as a part of the award-winning FX series American Horror Story, appearing in season 3 and 4 of the series which aired in 2013-2014.

Emma landed the first role she ever tried out for as a 9-year-old portraying the role of Kristina Jung in Blow, a 2001 drama centered around the life of prolific cocaine smuggler George Jung. After several small movie roles, Emma was cast as the main character of a new Nickelodeon series called Unfabulous. The show focused on 7th grader Addie Singer and the real life joys and struggles of middle school. The show aired for 3 seasons and a total of 42 episodes, earning Emma Teen Choice and Young Artist Award nominations. Emma was also able to produce her own debut album titled Unfabulous and More in 2005 that also served as the show’s soundtrack.

Her Nickelodeon show helped her refine her skills as an actress, and lead to other roles in the 2006 film Aquamarine and as the title role in Nancy Drew. Possibly her best film role to date came as Casey Mathis in the wildly hilarious comedy We’re The Millers that also starred Jennifer Aniston and Jason Sudeikis in 2013. Emma has also recently starred in season three of the horror anthology series American Horror Story from late 2013 through January 2014.

The actress has appeared in cover stories for many print publications including Glamour, Elle, Seventeen and Women’s Health magazines. Emma has worked as a brand ambassador and celebrity spokesperson for skincare brand Neutrogena in which she appeared in both print and TV advertisements for the brand.

It was recently announced that Emma Roberts will executive produce and voice the show Betches, an animated television series based on the young women’s humor website and popular Instagram account and is in the works at Comedy Central.

WORK WITH EMMA ROBERTS: Would your organization like to hire celebrity speaker Emma Roberts for an endorsement, public relations campaign, or one of a kind appearance at your next conference or special event? Contact Celebrity Speakers Bureau today to hire Emma Roberts or another great celebrity speaker via email at booking@celebrityspeakersbureau.com .