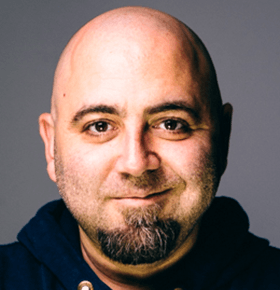 Celebrity Chef Speaker and baker extraordinaire Duff Goldman makes some of the best cakes in America. Chef Goldman took an interest to food at a young age, beginning to work at a bagel store in a mall at the age of fourteen.  When he was a sophomore in college he dined at, what’s considered, one of the finest restaurants in Baltimore called Charleston. After eating there, he was inspired to apply as a cook, and the head chef Cindy Wolf, reluctantly, gave him a job making cornbread and biscuits. After graduating from the University of Maryland, Baltimore County, Goldman went on to study at the Corcoran College of Art and the Culinary Institute of America at Greystone in Napa Valley, California where he was able to study and train under acclaimed chefs. He also worked at the prestigious French Laundry and Vail Cascade Hotel, then moved on to bake bread at Olives in Washington D.C.  In 2000, Goldman opened his own business called Charm City Cakes.  Starting as a small business run from his home in Charles Village Baltimore, Charm City quickly rose to popularity, becoming known for taking any request and baking any type of cake, no matter how unusual it seemed. Chef Goldman and his team of pastry engineers have made everything from a three-foot butter cream sculpture of Elvis to an edible Wrigley Field. He has also made cakes for numerous celebrities including Tom Clancy, the cast of Lost, and the cast of 30 Rock. Celebrity Chef Speaker Goldman has also been featured on several television series including Food Network Challenge, Iron Chef America, Oprah, The Tonight Show with Jay Leno, Cupcake Wars and Man V. Food.  His bakery Charm City Cakes Shop was also featured on the Food Network’s Ace of Cakes. Goldman has also had a few acting gigs, voicing two characters in the show King of the Hill after making a cake for the cast, and playing Baker Ben the Muffin Man in the show Imagination Movers. In October 2009, he released a book, with his brother Willie, titled Ace of Cakes: Inside the World of Charm City Cakes, which provided an inside look into the bakery and the show.

Celebrity Chef Speaker Duff Goldman, being from a Jewish family, is also known for being actively involved in Tzedakah, the Jewish practice of performing charity and philanthropic acts. In 2008 he set a world record for baking the largest cupcake.  The massive pastry weighed a total of 61.4 pounds, over 150 times the size of a regular cupcake, and amazingly, was entirely edible. Goldman created the record-breaking cupcake to raise money and awareness for the Share Our Strength charity, a campaign working to end child hunger in America. Duff’s most recent effort of philanthropy is making a life-size cake of Archie the therapy dog to be auctioned off during the 22nd annual Casa Pacifica Angels Wine, Food & Brew Festival. Proceeds from the event benefit the Casa Pacifica Centers for Children & Families.