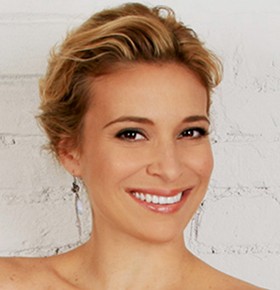 A television personality, Celebrity Chef Speaker Donatella Arpaia appears regularly as a judge on The Food Network’s hit series, The Next Iron Chef series and Iron Chef America. In 2011, Chef Donatella was asked to appear as a Culinary Expert to judge the competition on season 2 of the Food Network series Worst Cooks in America. Arpaia joined celebrity chef hosts Anne Burrell and Robert Irvine, along with other guest Culinary Expert Judges, Chef Marc Murphy and mastermind restaurateur Drew Nieporent. Donatella has also made guest appearances on Bravo’s Top Chef, The Today Show where she serves as a contributing chef, The Martha Stewart Show, The Rachael Ray Show, and The Best Thing I Ever Ate.

Chef Arpaia released her first cookbook in 2010, titled Donatella Cooks. The book serves as a guide to entertaining company in your home, complete with countless recipes to cooking the perfect dishes for any occasion and tips on how to set the perfect atmosphere from what music to have on in the background to decorating tips and techniques.