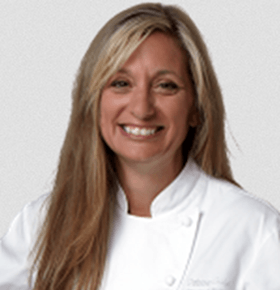 Chef Debbie Gold was named “Chef to Watch” by Esquire magazine and has lived up to the title ever since. Gold identifies her studies at the University of Illinois for restaurant management and the passion for food she was born with as two of the main reasons for her success in the culinary industry.

Celebrity Chef Debbie Gold received her professional culinary training while working in France at L’Ecole Hoteliere de Tain L’Hermitage and doing apprenticeships in Michelin-starred restaurants across America. Chef Debbie’s cuisine is described as a “luxurious version of New American cuisine” that “revolves around a superb and original command of ingredients.”

She has worked for restaurants in Chicago such as Charlie Trotter’s, Everest and Mirador. She also has her own successful restaurant venture called 40 Sardines. Debbie Gold made her first big television debut on season two of Bravo’s Top Chef Masters where she competed against prestigious celebrity chefs, including Ludo Lefebvre, Graham Elliot Bowles, Govind Armstrong, Susur Lee, Jonathan Waxman, and Marcus Samuelsson. Chef Debbie returned to the show again in 2012 where she faced a new lineup of impressive chefs, such as Art Smith, Thierry Rautureau, Lorena Garcia, and Top Chef Master Winner, Chris Cosentino.

Perhaps Chef Gold’s most notable accomplishment to date is her position as Executive Chef of the American Restaurant. Thanks to Gold’s work there, the American Restaurant was named one of the top 100 restaurants in America in 2013 by the blog and book “Opinionated About Dining”. Gold also won the James Beard Award in the Best Chef: Midwest category.