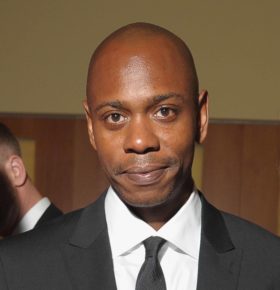 Comedian Dave Chappelle has finally made his comeback to late night TV. With his first visit in over ten years Dave recently took a step back into the spotlight and went on the Late Show with David Letterman. Celebrity Speaker Dave’s comedic genius has always left fans in stiches so to speak and all were hurt when he decided to take a break from his television show. Everyone is glad he is back from his “vacation” and doing stand-up yet again.

Celebrity speaker Dave Chappelle was born in Washington D.C. He was told by a family friend who happened to find him quite funny that he would one day grow up to become a comedian. He idolized the greats of his childhood such as Richard Pryor and Eddie Murphy, and Dave decided to try his hand at acting. At the famous yet deadly Apollo Theater’s amateur night Dave was booed off the stage simultaneously causing him to want to further his career in the entertainment business. His first major acting role came when he performed in Robin Hood: Men in Tights. This movie sent his career into an upward spiral. Since then he has acted in The Nutty Professor alongside Eddie Murphy, You’ve got Mail with Tom Hanks and Blue Streak with Martin Lawrence. His most productive work is by far his Comedy Central series The Chappelle Show. The show aired for two years with Chappelle participating in a number of short comedy skits with actors including Wayne Brady, Charlie Murphy, and Donnell Rawlings.

Dave has done countless interviews with magazines like Time, Esquire and XXL magazines and he has been involved with many charitable efforts in communities across the United States. Something very close to him is the Seeds of Peace International Camp. The camp brings together American, Israeli, and Palestinian as well as other Middle Eastern children for a basketball camp teaching them the game as well as how to respect others. He is currently ranked on Comedy Central’s “100 Greatest Standups of All-Time” list.