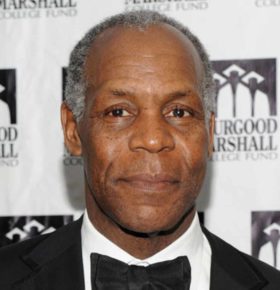 Celebrity Speaker Danny Glover is a unique triple threat. As an actor, producer, and philanthropist, Danny’s career has been nothing short of inspirational. Danny was born to two hard working parents who were very active in civil rights. His strong moral upbringing later would lead Danny to pursue meaningful roles on the big screen and in made-for-TV movies. Some of Danny’s most recognizable roles include Roger Murtaugh in the Lethal Weapon action film series, George Knox in Angels in the Outfield, and his Emmy Award nominating performance as the Late Nelson Mandela in the 1987 biopic about his life.

Danny began his career in theater after quitting his job as a city administrator. He honed his skills at the Black Actor’s Workshop of the American Conservatory Theater. His first debut was on Broadway in Master Harold and the Boys. His fame led him to be discovered by director Robert Benton, who casted Danny in the Oscar-Nominated Places in the Heart. Danny was a natural, and he earned an Independent Spirit Award for Best Male Lead for his pivotal role in Charles Burnett’s To Sleep with Anger.

In 2005, Danny co-founded Louverture Films. Louverture Films dedicates its time and resources to producing films with significant historical justice and integrity. They have produced films such as Trouble the Water, Africa Unite, and Uncle Boonmee. Trouble the Water won the Grand Jury Prize at the 2008 Sundance Film Festival. They also produced the award winning film Bamako and The Disappearance of McKinley Nolan.

Danny is also well-known as a dedicated activist and humanitarian. As a student at San Francisco State was a member of the Black Student Union that was a part of 5-month strike to establish a Department of Black Studies. The strike was the longest student walkout in U.S. history and set the tone for how important social improvement would become for him later in life. He has become involved with a number of organizations who speak out for economic justice and health care programs in the US as well as Africa. Danny has received the DGA Honor in 2006 and has served as a Goodwill Ambassador for the United Nations Development Program from 1998-2004. He also serves a UNICEF Ambassador among many other smaller councils.