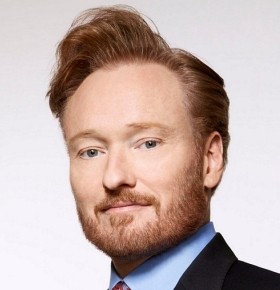 Celebrity Speaker Conan O’Brien is one of the United States most well-liked and well-known late night TV show hosts, writers, and comedians in popular culture.

Conan worked as the host of NBC’s Late Night show replacing David Letterman before moving to TBS and starting his own late night show Conan in 2010. His energetic and spontaneous comedic routine has also earned him hosting gigs for some of Hollywood’s biggest award shows including the Primetime Emmy Awards twice and he is set to host the 2014 MTV Awards. Over the course of his TV hosting/writing career, Conan is a 6-time Writers Guild of America Award winner and has won 2 Primetime Emmy Awards for his writing for Saturday Night Live and Late Night with Conan O’Brien.

Celebrity Speaker Conan began his career in late night television as a writer for an HBO sketch comedy series Not Necessarily the News and performing with the well-known improvisational group The Groundlings. He would eventually become a writer for the popular comedy show Saturday Night Live from 1987-1991, and then served as a writer and producer of The Simpsons until 1993. After Letterman’s departure in 1993, executive producer Lorne Michaels would name Conan as the new host of NBC’s Late Night show. After initial criticism, Conan would elevate the show to the top of the late night TV show ratings and averaged a viewing audience of about 2.5 million viewers each night.  After a brief stint in 2010 as the host of The Tonight Show that saw Jay Leno return to his late night glory, Conan embarked on a sold out cross-country tour called The Legally Prohibited from Being Funny on Television Tour. Conan’s spontaneous comedic style has also given him the opportunity to appear as the host of multiple special events including TNT’s annual TV special Christmas in Washington and as the Master of Ceremonies at the White House Correspondent’s Dinner most recently in 2013.