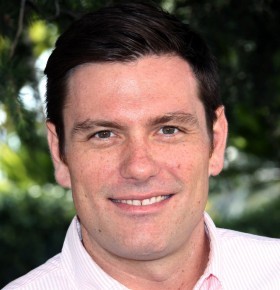 French Canadian chef Chuck Hughes is a celebrity chef, restaurateur and television host whose trademark is his tattooed arms resembling some of his favorite ingredients including arugula, bacon, lemon meringue pie, and lobster. Growing up in Montreal, Canada, Hughes enrolled in culinary school after his mother suggested he make his passion into a career. From there, Chef Chuck interned at Restaurant Globe in Montreal and worked in the city’s most popular restaurants including Time Supper Club, Globe, and Tapeo. In 2006, Chef Hughes opened his own restaurant, Garde Manger, with his best friends and partners Kyle Marshall Nares and Tim Rozon. After a multitude of success form Grande Manger, the trio opened their second restaurant, Le Bremner, to packed seating and great reviews in 2012.

Celebrity Chef Speaker Chuck Hughes’ restaurant, Garde Manger, spawned a hit reality cooking show, Chuck’s Day Off in 2010. On the show, which airs on Food Network in Canada and on Cooking Channel in the US, cameras follow Hughes as he faces the day to day challenges of running a successful restaurant. Chef Chuck also hosted a series called Chuck’s Eat The Street and Chuck’s Week Off: Mexico, and continues to make appearances on programs such as NBC’s Today Show, Unique Eats, Ace of Cakes, The Best Thing I Ever Ate, and Top Chef Canada.

Celebrity Chef Speaker Chuck Hughes became a force to be reckoned with in the culinary world when he went up against Iron Chef Bobby Flay in Season 9 of Iron Chef America. Hughes defeated Flay in the Canadian lobster competition, making him the youngest Canadian chef to win the show. He also appeared as a contestant on Season 4 of The Next Iron Chef in 2011.

Celebrity Chef Speaker Chuck has also appeared on Food Network’s The Next Iron Chef: Super Chefs. On Cooking Channel, Chuck is taking a break from the daily grind of running his two restaurants as he trades in his black T-shirt and apron for a pair of shades and sunscreen as he travels to Mexico in Chuck’s Week Off: Mexico. Join Chuck as he makes his way across the country in search of culinary adventures and authentic Mexican food.