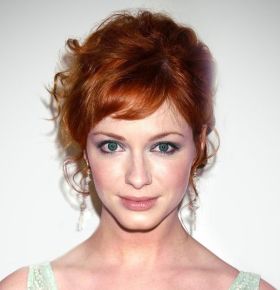 Best known for her television work, Celebrity Speaker Christina Hendricks has been in acting since a very young age. Doing children’s musicals helped to improve her confidence on the set giving her the ability to go out in front of many people who may judge and critique her on a very tough level and get the job done.

Celebrity Speaker Christina Hendricks grew up having to move around some because of her father occupation and through him she has both U.S and U.K nationality. When Christina turned 18 she became a model and stayed in the profession for about nine years. In her early twenties she began her acting career working on shows like Beggars and Choosers as well as Kevin Hill. It was not much longer that she was offered her position on the hit TV show, Mad Men in 2007. The show also stars Jon Hamm, and Elisabeth Moss. Since the drama series began it has won 15 Emmy’s and 4 Golden Globe Awards. It is the first basic cable series to win an Emmy for Outstanding Drama Series. She has also had roles in series such as ER which has starred George Clooney, as well as Firefly. Christina has also done her part on the big screen acting with superstars Carey Mulligan and Ryan Gosling in the movie Drive. The movie is about a Hollywood stuntman who by night doubles as a getaway driver. The movie was expected to be so good it was featured at the 2011 Cannes Film Festival where it was received with great applause and adoration. Celebrity Speaker Christina is currently filming for a movie called The Neon Demon that will debut sometime in 2016.

She has been called compared to the likes of Marilyn Monroe and Jane Russell for her new Hollywood style. For this Christina has represented Vivienne Westwood’s “Get a Life” jewelry collection Christina is currently sponsored by London Fog Apparel and in the past as worked with Visa and Baskin-Robins.