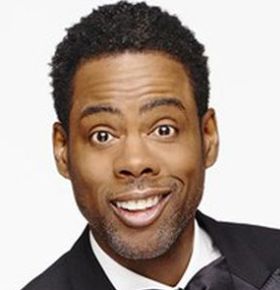 Celebrity Speaker Chris Rock rose to fame as a stand-up comedian before earning his place among Hollywood’s elite as a talented actor.

Celebrity Speaker Chris Rock grew up in Brooklyn New York, but it was not the lavish New York lifestyle as seen on television. Rock was bussed to schools in the predominantly white neighborhoods of Brooklyn as a child, where he endured bullying from classmates. The bullying and harsh treatment from classmates eventually caused him to drop out in high school and begin working at various fast food restaurants. He was forced to withstand more hardships as his father was killed in a car accident, and his older half-brother died after a long struggle with alcoholism. However, these obstacles did not prevent Chris from pursuing his dreams. He began doing stand-up comedy in New York City in 1984, slowly climbing the ranks, and eventually landing small roles in the film I’m Gonna Git You Sucka and the television series Miami Vice.

These roles lead him to famed comedian Eddie Murphy, who upon seeing his performances, befriended him and gave him a role in the movie Beverly Hills Cop II. Then in 1990 Rock earned one of the highly coveted spots on the Saturday Night Live cast along with Chris Farley, Adam Sandler, Rob Schneider, and David Spade.  During this time he also played a crack addict in the film New Jack City, which won him many positive reviews from the critics.  Three years later, Rock left SNL to pursue a film career. He went on to star in the HBO comedy special Big Ass Jokes, then Bring the Pain. This gig established Rock as one of the best comedians in the business as he won two Emmy Awards for his performance.

He continued with HBO comedy specials starring in Bigger and Blacker and Never Scared, and then eventually earned his own talk show on HBO, The Chris Rock Show, which won him another Emmy.  After the success of his stand-up comedy acts, the movie roles began to pour in for Chris Rock. After having supporting roles in Dogma, Beverly Hills Ninja, Lethal Weapon 4, and Nurse Betty, he went on to star in The Longest Yard, Bad Company, Down to Earth, Death at a Funeral, Madagascar, Grown Ups and 2 Days in New York.  He has also done work writing and directing for the movies Head of State and I think I Love My Wife. In addition to his comedy work, Rock was also bestowed the honor of hosting the 77th Academy Awards, as well as the 2014 BET awards.

Celebrity Speaker Chris Rock is also a husband, and father to two girls. He is married to Malaak Compton-Rock, the founder and executive director of StyleWorks, which is a non-profit salon that provides free service for women leaving welfare and entering the workforce.