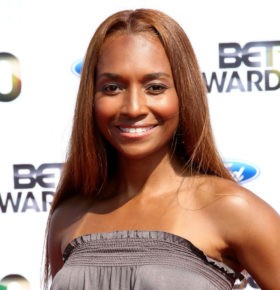 Rozonda Thomas, better known as her stage name Chilli, is an American music artist that helped form a part of one of the greatest all girl music groups of all time TLC. Together with singer Tionne “T-Boz” Watkins and Lisa “Left Eye” Lopes, Chilli and TLC produced chart-topping and award winning hit songs and albums that paved the way for similar all-girl groups such as Destiny’s Child and Danity Kane.

Celebrity Speaker Chilli first joined the group in 1991 after a stint as a back-up dancer for R&B duo Damian Dame. Some of TLC’s best hits Creep, Waterfalls, and No Scrubs still get plays today as classics of their time and were only a few of the songs off their first three albums that helped rack up 5 Grammy awards and multiple American Music Association and MTV VMA awards among countless other industry achievements. Both Billboard magazine and Black Entertainment Television (BET) have dubbed TLC the greatest girl group of all time. Chilli and Tionne experienced heartbreak along with the world in 2002 when Lisa was killed in a car accident in Honduras. TLC would release its fourth album 3D featuring never before heard vocals from Lisa before pursuing solo careers and coming back together for commemorative performances. Chilli was rumored to have been working on an album during the late 2000’s and several songs leaked to the public including her first single Dumb, Dumb, Dumb.

Aside from her music career Chilli has made multiple appearances on the big screen in TV shows such as The Parkers and That 70’s Show before becoming the star of her own 2-season reality TV show on VH1 called What Chilli Wants from 2010-2011. The show followed Chilli’s search for love with help from relationship expert Tionna Tee Smalls. Her most recent work on the big-screen was as a contestant on Food Network’s Rachael vs. Guy: Celebrity Cook-Off. She also started her own handbag line Bags by Chilli that allows buyers to design handbags and wallets with personal photos incorporated into the design.