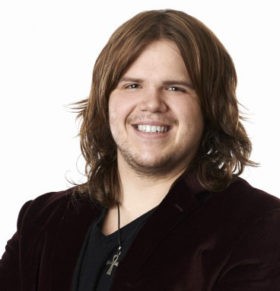 Caleb, who performed songs like Aerosmith’s Dream On and previous winner Carrie Underwood’s Undo It on the show, became the first hard rock and heavy metal singer to win the show, but this past season was not his first appearance on American Idol. As they say, third time is the charm—he auditioned for two previous seasons and was eliminated both times. Caleb’s hard work and perseverance paid off and as he honed his abilities as a singer and a performer before taking home the title over runner-up Jena Irene. He was also the only winner to never fall in the bottom three during his winning season, even when he was forced to perform the finale with a vocal cord hemorrhage.

With his long hair and soulful voice, the Asheville, North Carolina native did not waste any time and got right to work on his first self-entitled album, Testify, which was released in July 2014. Since his win, Caleb has performed and made numerous appearances such as Live with Kelly and Michael and PBS’s National Memorial Day Concert while also preparing for the upcoming American Idol Live! 2014 concert tour.