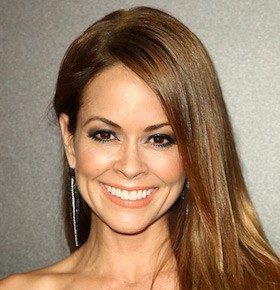 Television personality, actress, model, author, and celebrity speaker Brooke Burke was the co-host of the popular dance competition series, Dancing with the Stars, alongside host Tom Bergeron until 2013. Burke started out as a contestant on the show in season seven where she competed against twelve other celebrities including reality television star Kim Kardashian, celebrity chef Rocco DiSpirito, singer Toni Braxton, soap opera star Susan Lucci, *NSYNC singer Lance Bass, and Olympic volleyball player Misty May-Treanor. After competing for ten weeks on the show, Brooke and dance partner Derek Hough won the competition and were awarded the famous mirror ball trophy in November, 2008. Two years later she signed on as co-host of Dancing with the Stars. Currently, Burke is the co-CEO of ModernMom, a mommy blog, and is running her activewear line, Caelum, and her fitness wrap line, Baboosh Body Fitness Wraps.

Prior to Dancing with the Stars, Brooke Burke hosted E! Network’s show Wild On! for three years and the CBS reality show, Rock Star, in 2005 and 2006. Other hosting jobs that she has had include co-hosting the annual Miss America pageant with The Bachelor host Chris Harrison for three seasons. Burke has also appeared on television talk shows including The Oprah Winfrey Show, The Ellen DeGeneres Show, Entertainment Tonight, Fox and Friends, Live with Kelly and Michael, and countless others.

Outside of her television career, Brooke Burke has also expanded her brand as an exercise and fitness guru with a line of workout DVD’s  and starring in infomercials for a Swiss ball video fitness workout series called Gunnar Peterson’s Core Secrets. She has also been spokesperson for brands including Coca Cola, Anheuser Busch, Skechers, M Professioinal Cosmetics, and Discover Card.

In 2011, Brooke published her first book entitled The Naked Mom: A Modern Mom’s Fearless Revelations, Savvy Advice, and Soulful Reflections in which she gives readers an inside look of her experiences dealing with balancing raising her family and running her household while simultaneously pursuing a full-time career.