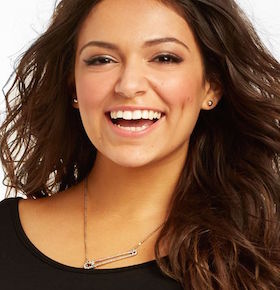 Celebrity speaker Bethany Mota has become one of the premiere stars in the world of internet fame.  At just the tender age of 18, Mota has an audience of millions on a daily basis that has allowed her to become a budding superstar.  Since creating her YouTube channel in 2009, Bethany has gained over 6 million subscribers and is one of the most popular channels on YouTube.

Celebrity Speaker Bethany began her ascend as an Internet star by posting her own rendition of haul videos of her latest fashion purchases.  Her bubbly personality was a huge hit with other girls and young women.  The inspiration for her channel came from a terrible personal experience with cyber-bullying that left Mota looking for an outlet.  As her videos became more popular, Mota gained more followers and diversified her content to include recipes, hair/makeup tutorials, and other do-it-yourself ideas.  Her popularity began to put her on the radar of a variety of fashion and cosmetic companies as they began to start sending her free products, which she would feature on her videos.  It has been estimated in 2014, that Mota makes about $40,000 per month on her videos, and she has created a reward system for her dedicated fans.  In 2013, Bethany reached an agreement with Aeropostale to release a clothing line.  Bethany holds all creative control for the line, and it is featured in all of their retail stores.

Aside from her videos, Mota has gone on a tour across America to speak to young girls.  She calls it “Motavatour”, and it has allowed to her become even closer to an already interactive fanbase.  Additionally Mota has reported for the Nickelodeon Kids’ Choice Awards, and will be featured as a guest judge on Project Runway.