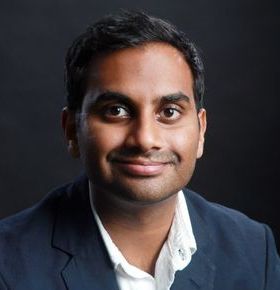 Celebrity Speaker Aziz Ansari has quickly become one of the most recognizable comedians/actors of the current generation.

His talents highlight his versatility as an entertainer as both a stand up comic and actor.  Aziz’s brand of humor has landed him in the upper echelon of comedians in the 2010’s due to a string of hilarious comedy specials, television and film roles.  He is a fan favorite amongst audiences both young and old for his lively spirit and distinctive personality.

Celebrity Speaker Aziz began his career in the spotlight performing at comedy clubs and garnering a reputation as one of the America’s funniest young comedians.  He reached his first major breakthrough when he was cast in the NBC series Parks and Recreation.  Aziz has received much positive acclaim for his character, Tom Haverford, who is referred to by many as one of the funniest on the program.  On the film circuit, Aziz’s first significant character came as a supporting role in Funny People, which starred Seth Rogen and Adam Sandler.  Parlaying his success into larger roles, Aziz has played major roles including the 2011 movie 30 Minutes or Less alongside Jesse Eisenberg.  Aside from his ability in front of the camera, Aziz is also an accomplished stand-up comic.  His style is concentrated on observational and improvisational comedy that allows him to remain refreshing and entertaining.  He has released four-comedy specials to date the most recent being, “Live at Madison Square Garden”, which is currently available on Netflix.

Aziz Ansari’s profile exceeds beyond that of an ordinary comedic actor.  He was chosen to host the 2010 MTV Movie Awards where he also earned an award for Best Comedic Performance.  In terms of philanthropy, Aziz has given his time and effort to the community.  He’s been a spokesperson for Oxfam America, and additionally hosted a charity benefit following the Boston Marathon Bombing for those affected by the tragedy.