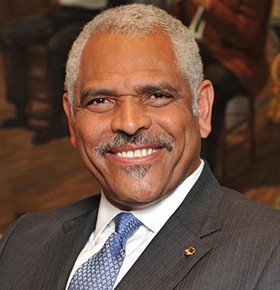 Top business speaker for hire Arnold Donald is currently the President and CEO of Carnival Corporation, the world’s largest travel leisure company. Arnold is an incredibly accomplished corporate executive whose rags to riches story from growing up in the Ninth Ward in New Orleans to achieving major business success is a true lesson in aspiration, determination, hard work and self-confidence.

Donald’s American success story begins in the heart of New Orleans, Louisiana during the civil rights movement. He and his family lived in the Ninth Ward where Arnold was exposed to ugly social issues including poverty, violence and the serious racial divide in the country at that time. Arnold credits the support of his family, friends and mentors in his aspirations to become more than the status quo. He was ambitious for the future, and wasn’t going to let society dictate what he was capable of accomplishing.

Arnold’s planning and execution before rising to the CEO is a great example of the importance of mapping out a strategy for success in work and life. He decided to get degrees in economics (Carleton College) and engineering (Washington University) before going to business school (University of Chicago) in order to differentiate himself from his peers. During his years at Washington, he worked as the assistant to the dean of engineering where he helped placed students for summer jobs. He had placed several students at Monsanto, and upon graduating from the University of Chicago business school, Monsanto offered him a job of his own working as a project manager.

Since getting his foot into the door in the corporate sector, Arnold has ascending to top corporate positions within organizations including the Merisant Company, the Oil-Drill Corporation of America and The Executive Leadership Council to name a few. From 2006-2008, he worked as the President & CEO of the Juvenile Diabetes Research Foundation International. Since taking the job with Carnival Corp. in 2013, Arnold has been praised for streamlining operations within the company and growing the company market cap roughly $12 billion to $37 billion in 2016.

Would your organization like to hire Arnold Donald for a keynote speech at your next event? Contact Celebrity Speakers Bureau today to hire Arnold Donald or another top business speaker to entertain and engage your audience at an upcoming corporate conference, speaker series, trade show or special event.