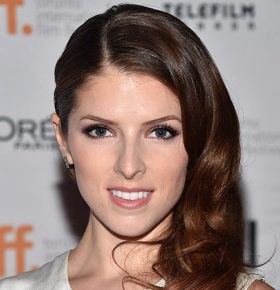 Actress, public speaker, and funny gal Anna Kendrick has has taken the entertainment world by storm in the last few years on the curtails of some hugely popular movie roles.

Audiences may recognize public speaker Anna from her role as Jessica Stanley in The Twilight Saga that ruled the box office from 2008-2011.

She also starred in the 2014 film adaptation of Into the Woods as the main character, Cinderella. The star-studded cast of Into the Woods included Meryl Streep, Emily Blunt, James Corden, Chris Pine, Tracey Ullman and Johnny Depp.

Many people have come to love Anna and her ability to poke fun at herself and her imperfections as she shares her daily life through her social media channels. This young upstart also has an incredible voice! In 2012 she appeared as Beca Mitchell in Pitch Perfect, a film about an all-girls a ‘Capella group. Her popular song in the film Cups (When I’m Gone) landed at #2 on Billboard’s Adult Pop Song chart that year. In 2015, Anna appeared as a celebrity ambassador for Newcastle Brown Ale in their featured commercial during Super Bowl XLIX. The official YouTube video of the commercial had more than three million views alone in the first week!

Anna got her start in show biz on Broadway and was nominated for a Tony Award for her performance in High Society at the age of 12. After a few other performances on stage, she made her debut on the big screen in the 2003 musical comedy Camp, the first of a few musical comedies in which she would star. In 2009, she appeared in Up in the Air with George Clooney and Vera Farmiga. Anna was nominated for an Academy Award, Screen Actors Guild Award and a Golden Globe Award for her performance in the film and was awarded Best Supporting Actress by the National Board of Review.

Celebrity and public speaker Anna has continued to grow her film career  as she starred in the sequel to Pitch Perfect, Pitch Perfect 2. Anna has also expanded her musical resume by playing the role of Cathy in the film adaptation of Jason Robert Brown’s Off-Broadway musical The Last Five Years in 2015.