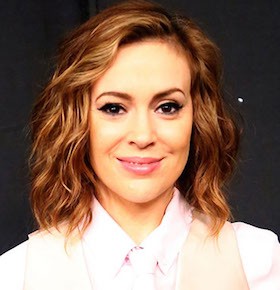 Alyssa Milano has been in the spotlight ever since her breakout role at age twelve in the mid-eighties as the daughter of Tony Danza’s character, Samantha Micelli, in the hit television series Who’s the Boss? Celebrity Speaker Alyssa Milano the role for the eight seasons that Who’s the Boss? ran and won several Young Artist Awards for her portrayal of Samantha, including Best Young Female Superstar in Television, Exceptional Performance by a Young Actress, Starring in a Television, Comedy or Drama Series, and Best Young Supporting Actress in a Television Series. Following the series finale, Milano went on to play characters in several notable programs including Melrose Place, where she had a recurring role for five seasons, Fantasy Island, Family Guy, My Name is Earl, and Castle. In the late nineties, she signed on to play Phoebe Halliwell, one of the three main witch characters in the WB’s series Charmed. The series ran for eight seasons in which Alyssa starred alongside actresses Shannen Doherty, Rose McGowan, and Holly Marie Combs; she also became a producer of the show in season five and continued to produce until the series concluded in 2006.

In 2013 Alyssa Milano got the lead role in the ABC primetime series Mistresses. The show saw successful ratings, ranking at number two for scripted summer drama. In the fall of 2013, Milano made her reality TV debut as host and judge on season three of the hit spin-off series Project Runway: All Stars which airs on Lifetime. On the fashion reality show, Alyssa joins designers Georgina Chapman and Isaac Mizrahi on the judge panel, alongside guest judges which include actresses Kristin Chenoweth, Abigail Breslin, CBS This Morning co-anchor Gayle King, and celebrity designer Nate Berkus.

Outside of television, Alyssa has starred in movie roles throughout her career as well. In 2011 she starred in the comedy Hall Pass alongside actors Owen Wilson and Christina Applegate. She also played a small role in New Year’s Eve which featured famous actors Halle Berry, Robert De Niro, Sarah Jessica Parker, Michelle Pfeiffer, and many more.