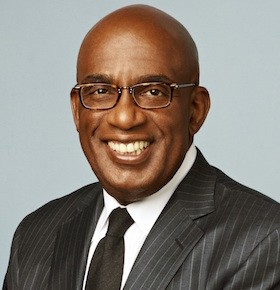 Al Roker is a renowned TV anchor best recognized for his longstanding run as one of the familiar faces of The Today Show with co-anchor Matt Lauer. While on his way to becoming the nation’s most popular weather man, Celebrity Speaker Al created his own production company Al Roker Entertainment which produces shows on The Weather Channel, A&E, Discovery Channel and Spike TV. Al and Today show counterpart Matt Lauer made cameo appearances on a 1998 episode of Saturday Night Live and he holds the record for most appearances on the Late Night with Conan O’Brien Show with over 30 guest spots on the show. Al also has another spot in the Guinness World Record book with a 34-hour uninterrupted live weather report that he did on November 12, 2014.

A New York native, Al found work as a weather man with a local CBS affiliate while in college at the State University of New York at Oswego before moving to D.C. to continue his career with an independent TV station. He would eventually begin working for an NBC affiliate in Cleveland, Ohio and after 5 years he was promoted to the flagship news outlet in NYC. Al’s career evolved and his love for game shows led him to become the host of both Celebrity Family Feud in 2008 and MSNBC’s Remember This. Under his production company he also host a show on the Food Network called Roker on the Road and his own Weather Channel show Wake Up with Al. He has held voiceover parts in several animated films such as Madagascar 2 and Cloudy with a Chance of Meatballs 1 & 2.

During his spare time Al has co-authored a set of 3 bestselling novels with Dick Lochte following the story of celebrity chef turned detective Billy Blessing. Al has also become an encouraging voice in the health and wellness community with his recent book published in 2014 titled Never Goin’ Back: Winning the Weight Loss Battle for Good. Some may not know Al published his own cookbook in 2002 as well titled Al Roker’s Big Bad Book of Barbecue: More Than 125 Recipes for Family Celebrations All Year Long. Al is a member of the celebrity board of the Ronald McDonald House Charity organization and supports various other charities including the Wounded Warrior Project.