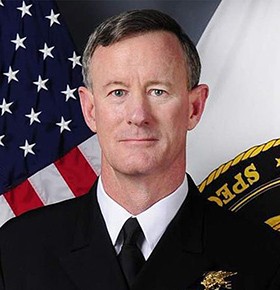 Motivational military speaker for hire Admiral William McRaven is a retired 4-star admiral and 37 year veteran of the United States Navy. His empowering commencement speech at the University of Texas in 2014 went viral in 2017 and he has been one of the most requested military speakers on the speaking circuit ever since. Adm. McRaven’s empowering keynotes draw on his experiences in the Navy and teaches audiences life lessons in leadership/risk management, resilience in the face of opposition, taking responsibility and how to take control of your circumstances among other inspirational anecdotes.

Adm. McRaven attended the University of Texas at Austin where he was also a member of the Naval Reserve Officers Training Corps. He was then commissioned to the U.S. Navy and completed Navy SEAL training in 1978. He has since been a commander at every level of the within the U.S. Special Ops community. During his service as Admiral, William was involved in many national policy decisions under President’s George W. Bush and Barack Obama.

In 2011, Adm. McRaven was instrumental in the planning and execution of Operation Neptune Spear, the special ops mission that resulted in the death of Osama Bin Laden. In December of that year, he was the runner-up for TIME Magazine’s Person of the Year Award. In 2014, Adm. McRaven retired from the U.S. Navy as the longest serving Navy SEAL in American history.

In addition to his service in the Navy, Adm. McRaven is a bestselling author of two books. The first published in 1995 is called Spec Ops: Case Studies in Special Operations Warfare Theory and Practice. His second book, Make Your Bed: Little Things That Can Change Your Life…And Maybe the World was released in August of 2017. This bestseller includes Adm. McRaven’s 10 fundamental lessons he learned during his time in Navy SEAL training. The book encourages readers to prepare for and overcome life’s obstacles and find ways to change the world for the better.