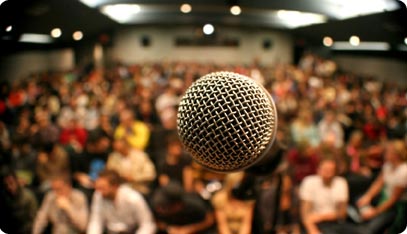 Top 10 Motivational Speakers in the World

Eric Thomas is one of the best known motivational speakers in the world and many people will likely already be familiar with him. As a teen, Thomas dropped out of high school and left home. After this, he lived homeless in Detroit for two years and eventually finished his education. Today, he has a B.A. from Oakwood University, an M.A. in K-12 administration, and a Ph.D. in education administration from MSU. Much of his work is centered around striving for success and the importance of education, which makes him especially well known among young people. In addition to being a motivational speaker, he is also a best-selling author and pastor.

You can find Tony Robbins at the top of almost every list of motivational speakers. After leaving an abusive home at the age of 17 years old, Robbins began forming his career as a motivational speaker. Robbins has a series of well-known self-help seminars and best-selling books. His seminars and books cover a wide variety of different topics, from overcoming obstacles to improving your finances. Robbins also works with well-known successful professionals in multiple industries.

Arianna Huffington’s name may sound familiar to anyone who’s ever read something from the Huffington Post, which she is the co-founder of. Prior to co-founding Huffington Post, she already had a reputation as a prominent feminist and has been involved in the media, philanthropies, and politics. Huffington is frequently considered to be one of the most influential women in the world. Today, her work is often centered around how companies can work to reduce stress and avoid burnout for their employees.

Nick Vujicic has had to overcome more than most people would be able to understand to reach the success he has today. Vujicic was born with a rare disorder called tetra-amelia syndrome which causes an absence of arms and legs. Despite his disability, Vujicic learned to do everyday tasks on his own and states he had a happy and normal childhood, although he was bullied for his condition. Watching one of his speeches, you can quickly see what an inspiration he is. Vujicic has written multiple books and founded Life Without Limbs, a ministry and non-profit organization.

If you’re looking for a motivational speaker who can help you take control of your finances, consider checking out some of Davey Ramsey’s work. After recovering from filing for bankruptcy, Ramsey began counseling those also going through financial trouble and has gained immense success from his financial advice. Ramsey’s talk radio talk show, The Dave Ramsey Show, is also one of the most popular in America and he has written several books on managing your finances.

Brené Brown holds a Ph.D. from the University of Houston, where she is currently a research professor and holds the Huffington Foundation – Brené Brown Endowed Chair. In her work, Brown focuses largely on vulnerability, shame, and courage. Brown’s TED talk on YouTube is one of the most popular TED talks in the world and she has her own Netflix special, Brené Brown: The Call to Courage.

Even if you aren’t familiar with Chris Gardner, there’s a good chance you’ve heard his story already, as his life was the inspiration for the movie The Pursuit of Happyness, which is based on his memoir. Gardner had a difficult childhood being raised with an abusive stepfather and going in and out of foster care. Gardner also had a period of time where he was a homeless single parent raising his young son. A large part of Gardner’s work helps to inspire people to succeed and reach their full potential.

As a child, Les Brown was thought to have a learning disability, which caused issues for both his education and self-esteem. However, Brown did not let what others think hold him back from becoming extremely successful. Through his work, we can all learn a little more about what it takes to achieve our dreams. Brown was also a member of the Ohio House of Representatives, in addition to writing several best-selling books and being a former TV host and radio DJ.

For those looking to live happier lives, Gretchen Rubin is the perfect person to turn to. Rubin gives live talks, has published several best-selling books, and hosts an award-winning podcast that can help teach us to be happy, successful, and more creative. Part of what makes her work so impactful is the way she addresses her audience. Rubin often uses humor throughout her work, both in talks and her writing, to help form a better connection with people.

Robert Kiyosaki is a successful businessman who can help you help you get better at personal finance and business matters. His personal finance book, Rich Dad Poor Dad, is one of the most popular personal finance books of all time. In addition to being a motivational speaker, he is also an entrepreneur and educator who advocates for financial education. Kiyosaki hosts classes and seminars that can help people find the inspiration and courage to succeed at whatever it is they do.