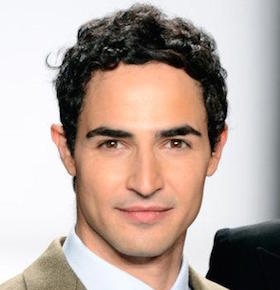 Celebrity Speaker Zac Posen grew up in New York City, one of the fashion meccas of the world, in the trendy and artsy neighborhood of SoHo. It all started out with the soon-to-be fashion designer cutting up any fabric he could get his hands on, even if he had to take it from his grandparents synagogue, but it was only a matter of time before Zac Posen would come to dominate the city’s style scene and runways around the world.

After starting out as an intern for Nicole Miller at the age of sixteen, Celebrity Speaker Zac began to gain prominence when a dress he designed for Naomi Campbell turned many heads in 2000. His first runway show debuted a year later, and soon Zac was in high demand and able to move his workshop from his parent’s living room to his own studio. In 2004 he received financial backing for his new line from Sean Combs’s signature line Sean John and also received the Swarovski’s Perry Ellis Award for Womenswear from the Council of Fashion Designers of America that same year. His designs can be seen on some of Hollywood’s most high-profile stars such as Rihanna, Natalie Portman, Claire Danes, Cameron Diaz, and Amanda Seyfried. Ashley Olsen also interned for Zac in 2005.

Even after his almost overnight success, Celebrity Speaker Zac continues to build his brand to worldwide recognition among numerous price points. He has launched collections for Target and Saks Fifth Avenue, and in 2014 he teamed up with David’s Bridal top produce a line of bridal gowns called Truly Zac Posen. In 2013, it was announced that Zac would serve as a judge alongside Nina Garcia and Heidi Klum on Project Runway.

Known for his glamorous and feminine clothing, particularly evening wear, Zac will be the first to tell you that fashion should not be conservative—it is a thrill.