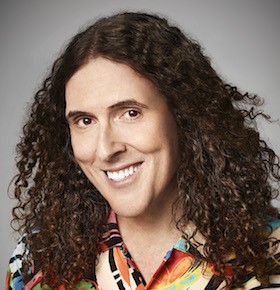 Celebrity Speaker Weird Al Yankovic is arguably the most popular comedic songwriter and performer in the history of entertainment. Over the course of 3 decades, Weird Al has countless humorous songs that often mock popular pop-culture tunes. His innovative use of music videos to add to the comedy-based music has been a large part of his commercial success. Al began to garner serious national acclaim in the 1990’s when he released a series of successful albums.

In 2014, Celebrity Speaker Al was still ticking along and released his latest album Mandatory Fun. Mandatory Fun was extremely well-received by the music market, and for the first time in Al’s career he had achieved a #1 album on the Billboard Top 100 List. To date, Al has recorded 14 studio albums and has been honored for his work with 3 Grammy Awards.  In addition to his work in music, Al Yankovic has attempted to have a presence in the community as well.  One example comes from his 2011 parody song “Perform This Way” which he based off of a Lady Gaga tune.  The proceeds from the song all went to support The Human Rights Campaign.