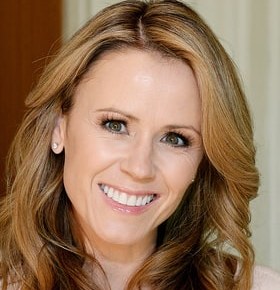 Contestant on season one of ABC’s The Bachelor, reality TV speaker Trista Sutter finished runner up when bachelor Alex Michel selected Amanda Marsh as the winner. After the show, Trista was selected to be the next bachelorette on ABC’s The Bachelorette. She chose Ryan Sutter as the winner and the couple was married on December 6, 2003. The network paid the couple $1 million to air their three-episode special called Trista & Ryan’s Wedding.

Trista Sutter also appeared on Dancing with the Stars and in a Hands Only CPR PSA campaign from the American Heart Association and the Ad Council with husband, Ryan Sutter. In 2007, Trista and Ryan told People magazine that they were expecting their first child and Maxwell was first reveled to the public on the cover of Us Weekly. In 2014, the couple appeared on Marriage Boot Camp: Reality Stars. They now have their own TV show, Rocky Mountain Reno, in which they help other couples renovate homes in the Colorado area. Trista Sutter is available for hosting, autograph signings, and endorsements.

TO WORK WITH TRISTA SUTTER: Reality TV Star Trista Sutter can be hired for endorsements and events in roles such as public speaker, autograph signings, SMT’S, and public relation campaigns.