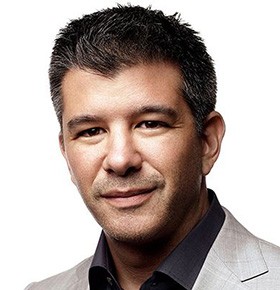 Business Keynote Speaker for hire Travis Kalanick is the co-founder and current CEO of the overwhelmingly successful ride service company Uber. He is known as an innovative thought leader in the tech space and a highly sought after keynote speaker for tech conferences, business summits and other industry events. In December of 2016, Travis was appointed to President Donald Trump’s business and economic advisory council along with fellow Silicon Valley entrepreneur and tech titan Elon Musk.

Travis was bit by the entrepreneurial bug at an early age and started his first business, an SAT prep course called New Way Academy, at 18-years-old. He studied computer engineering at UCLA before joining a group of classmates in founding Scour, a peer-to-peer search engine for sharing multimedia files. 3 years later, Travis and the engineering team from Scour founded Red Swoosh, another file sharing company. The company was sold in 2007 for $23 million.

It was in 2009 that Travis and Garrett Camp developed the idea for Uber, a mobile app that could connect people with drivers for transportation and ridesharing services. Uber now operates in over 507 cities in 66 countries and is considered one of the most popular transportation services in the world today. Travis and his Uber team have outlasted a very competitive marketplace that has seen a variety of companies such as Lyft and Curb attempt to mimic their services.

What makes Travis such a successful entrepreneur is his forward-thinking approach to business. He’s not concerned with what has already been done or what is currently going to market. He’s a futurist focused on innovating the world’s next big idea. In 2016, Forbes Magazine tapped him as a 2016 Global Game Changer and #64 on their list of the most powerful people in the world.