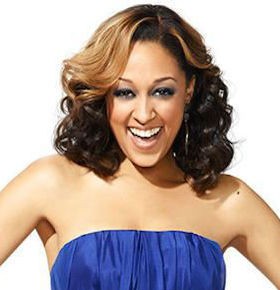 Actress and celebrity speaker Tia Mowry got her big break when she was spotted with her twin sister, Tamera Mowry, while on the set of the popular series Full House where they were playing a guest role. Producers developed the series Sister, Sister around the storyline of twin sisters who are reunited as teenagers after being separated at birth. Tia and Tamera acted in one hundred and twenty episodes of the show which ran for five years on ABC and The WB. Following the conclusion of the series, Tia Mowry went on to pursue roles on the big screen in films The Hot Chick with Rob Schneider, The American Standards, and Baggage Claim, where she joined actors Taye Diggs, Boris Kodjoe, and Paula Patton. In 2006 she returned to the small screen in the television series, The Game, which aired on BET until the show concluded in 2012.

Most recently, Tia and Tamera Mowry have been in the spotlight for their reality television show, Tia & Tamera. Tia now also stars in Nickelodeon’s Nick at Nite comedy, Instant Mom. The series premiered in August 2011 on the Style Network and aired for three seasons before the show moved to E! The show follows the lives of the celebrity twins as Tia learns to balance her professional career with her personal life and motherhood with her first child born in June of 2011. Following the birth of her son, Tia began chronicling her experience and in 2012 her first book, entitled Oh, Baby: Pregnancy Tales and Advice from One Hot Mama to Another, was published. In 2015, Tia had her cooking debut in the Cooking Channel series, Tia Mowry at Home.