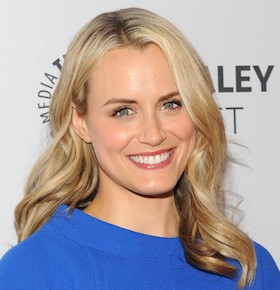 American actress Taylor Schilling can be seen in the hit Netflix series Orange is the New Black playing America’s favorite convict, Piper Chapman. Celebrity speaker Taylor Schilling began acting at a young age, inspired by her favorite television program NBC’s ER, she became very active in her middle school and high school theater programs going on to study the art at Fordham University. She earned her BA in 2006 and went on to graduate school at New York University to continue her theater studies, however, she decided to leave school early and begin auditioning.  As everyone knows, breaking into show business is not easy, and Schilling had to work as a nanny for many years to support herself before getting her big break.  In 2007 she was cast in the independent film Dark Matter alongside Meryl Streep, making her first feature film debut. This film opened the door for Schilling’s acting career, and just two years later she was cast in the NBC medical drama Mercy as Nurse Veronica Flanagan Callahan. She then went on to play Dagny Taggart in Atlas Shrugged: Part I, and Beth Green in the romantic drama based the Lucky One, based on the bestselling novel by Nicholas Sparks. Then her most recognizable role came as she landed the lead role of Piper Chapman in the Netflix original series Orange is the New Black. The show, based on real-life convict Piper Kerman and her memoir of the same name, premiered in July 2013 and instantly captivated audiences nationwide, and became one of the most popular, and talked about, shows in today’s pop culture world. The show was so well received by the critics, that it was renewed for a second season before the first season had even been debuted to the public, and Taylor quickly picked up her first Golden Globe nomination for Best Actress in 2014. She also won “Outstanding Performance by an Ensemble in a Comedy Series” at the Screen Actors Guild Awards in 2015. The second season of the show premiered in June 2014, and was again very well received, with most fans binge watching all thirteen episodes in a row. Viewers of the show eagerly wait to see what actress Taylor Schilling will bring to the table next, as the third season of the show is scheduled to premiere in June 2015.