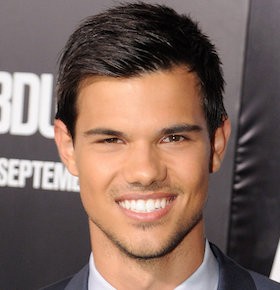 Teen heartthrob and celebrity speaker Taylor Lautner is one of Hollywood’s many young talents. The actor grew up in Michigan, where he was a nationally ranked martial artist before switching his focus to acting. Lautner got his start earning small roles in sitcoms such as The Bernie Mac Show and My Wife and Kids. He also had voice roles in popular kids’ television shows What’s New Scooby-Doo and Danny Phantom. He made the move to the big screen in 2005 landing his first film role in Cheaper by the Dozen 2. Shortly after he landed the lead role as Sharkboy in the movie Sharkboy and Lavagirl. Then, in the late 2000’s, he melted the hearts of teenage girls all over the world portraying the character of Jacob Black in the vampire phenomenon films, Twilight. In order to maintain this coveted role, Lautner had to completely change his physique, in a good way, forcing him to clock in the hours at the gym bulking up. As a result, the young actor made Glamour magazines 50 Sexiest Men list at number two, and People’s Most Amazing Bodies list at number four. This success and newfound popularity led Taylor to become the highest-paid teenage actor in Hollywood in 2010. The following year, Lautner branched out from his Twilight roots, to star in the action flick Abduction. Most recently, Lautner has signed on to join the BBC comedy series Cuckoo, replacing American comedic genius, Andy Samberg.

Outside of acting, Lautner is the poster boy for good health. His workout and diet regimen has been covered extensively by Men’s Health, and the actor has stated that he is drug and alcohol free. Taylor also has been known to avoid the Hollywood party scene and spotlight, as he resides with his parents and sister in Valencia, California, where he lives a relatively normal life helping to mow the lawn and take out the trash, and unlike many child stars, he has not blown off getting a proper education, as he takes classes at his local community college. Celebrity speaker Taylor also has made appearances on The Late Show With David Letterman, MTV, and Access Hollywood.