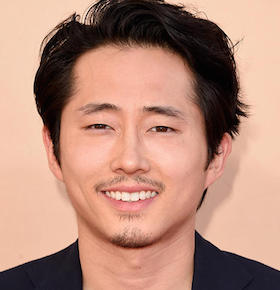 Conference Keynote Speaker Steven Yeun is widely recognized for his role as Glenn Rhee on AMC’s The Walking Dead but more importantly, for redefining the role of Asian American men in entertainment. Steven and his Walking Dead cast mates including Andrew Lincoln, Lauren Cohan and Norman Reedus have help to bring a comic book series to life as an award-winning TV drama.

Steven began his acting career in the improvisation scene in Chicago, performing with The Second City and Stir-Friday Night!. Steven considered himself a comedic actor and moved to Los Angeles assuming he’d audition for comedy roles. After auditioning for The Big Bang Theory, he landed his second audition as Glenn on The Walking Dead. While the hit drama series may be far from a comedy, Steven is a natural. His character has not only been one of the longest surviving original characters but along the way he has begun to redefine the role of Asian American men from tech geeks who never get the girl to this strong, fearless survivalist. In 2011, he was nominated for the Saturn Award for Best Supporting Actor on television.

Aside from his career-defining role on The Walking Dead, Conference Keynote Speaker Steven has also guest appeared on shows such as Law and Order: LA, Warehouse 13, Drunk History and Comedy Bang! Bang!.

Most recently Steven was cast as a character named Kenny in the film I Origins that premiered at the 2014 Sundance Film Festival. Steven has also provided his voice for the video game series, Crysis, and for an animated television series on Nickelodeon titled The Legend of Korra.

When he is not investing his time in acting, Steven is an investor in the restaurant business his younger brother co-owns, The Bun Shop, which is a Korean and Mediterranean fusion restaurant. Steven’s ability to combat adversity in the entertainment business as a minority and help redefine race roles in the industry makes him a role model for Asian Americans all over the world.