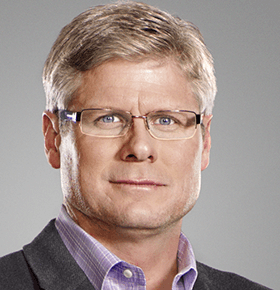 Top business speaker for hire Steve Mollenkopf is the CEO of Qualcomm, Inc. and a member of the company’s Board of Directors. He began his career with the company as an engineer over 20 years ago and has been a catalyst for creative innovation and implementation strategies within the company. His corporate success has led to high demand for him to share his thoughts on the future of technology and innovation as a keynote speaker for trade shows, business conferences and other industry events. In 2016, Steve was hired as a headlining keynote speaker for the globally renowned Consumer Electronics Show (CES) taking place in January of 2017.

Steve studied electrical engineering at Virginia Tech University and got his masters in the subject at the University of Michigan. In his career as an engineer, he has received 7 patents for his inventions in multi-standard transmitters, power estimation and measurement, and wireless communication transceiver technology.

Now Steve is revered as one of the greatest minds in modern technology and largely responsible for the rise of smartphones in mainstream usage. Before taking his job as CEO of Qualcomm in 2014, Steve was involved with improving several different departments within the company. He led the company’s chipset division and was instrumental in the development of modern 4G and LTE mobile technology. He also orchestrated the largest acquisition in company history (chipmaker Atheros – $3.1 billion) which helped Qualcomm expand beyond smartphones to new markets including wearables, health care and automotive.