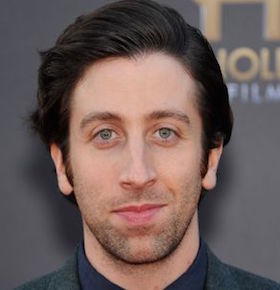 Actor, comedian, celebrity speaker and television star Simon Helberg became a Hollywood sensation as Howard Wolowitz in the hit CBS series The Big Bang Theory. The Emmy-nominated show, which also stars Jim Parsons, Kaley Cuoco, and Mayim Bialik, revolves around a group of nerdy and sometimes awkward friends living in Pasadena, California. The show has received an overflow of positive reviews and taken over a number of records, such as stealing the claim to television’s highest rated comedy from Charlie Sheen and Jon Cryer’s Two and a Half Men. The highly rated show has been nominated for various Golden Globes, People’s Choice, and Emmy Awards, and received many others like being selected to the American Film Institute’s 2009 Best Television Programs of the Year.

Acting runs in the family—Celebrity speaker Simon Helberg  is the son of actor Sandy Helberg and casting director Harriet Helberg; however, his interest in the show business didn’t spark until he was a teenager. Before he was a main cast member on the Big Bang Theory, Simon appeared in several major motion pictures. He had a supporting role in 2003’s Old School, 2004’s A Cinderella Story starring Chad Michael Murray and Hilary Duff, and George Clooney’s Academy Award-nominated film Good Night, and Good Luck in 2005. The funnyman has also made recurring appearances in Reno 911! and MADtv. In 2014, Salt Lake Comic Con welcomed Simon and fellow comedians Jon Heder and Stephen Amell to attend the vast popular arts and comic book convention in Salt Lake City, Utah. Simon’s latest work debuted in January 2015 as he directed and starred in a romantic comedy titled We’ll Never Have Paris.

When he’s not cracking jokes, doing voice impersonations of Al Pacino, or making you clench your sides in laughter, Simon is a proud father of two children and is married to actress Jocelyn Towne.  He is also an accomplished pianist, and his skills are occasionally showcased on The Big Bang Theory.